In this article, we’ll first take a quick look at the origins of the concept of fictional characters, then outline some practical techniques for creating compelling characters from thin air.

Where Do Characters Come From?

When we speak of characters from a structural standpoint, there are very specific guidelines that determine what is a character and what is not. But when we think of characters in every day life, they are simply anything that has a personality, from your Great Aunt Bertha (though some might argue the point) to the car that never starts when you’re really late.

Looking back through time, it is easy to understand how early humans would assume that other humans like themselves would have similar feelings, thoughts, and drives. Even other species exhibit emotions and make decisions, as when one confronts a bear face to face and watches it decide whether to take you on or find easier pickings (a personal experience from my recent hike on the John Muir trail!)

But even the weather seems to have a personality by virtue of its capricious nature. That’s why they call the wind Mariah, why there is a god of Thunder, and why the Spanish say Hace Color, when it is hot, which literally means, “It makes heat.”

Where Can We Get Some?

When writing a story, then, from whence can we get our characters? Well, for the moment lets assume we have no plot. In fact, we have no theme, no genre – we don’t even have any particular subject matter we want to talk about. Nothing. We have absolutely nothing and we want to create some characters out of “think” air.

Try starting with a name. Not a name like “Joe” or “Sally” but something that opens the door to further development like “Muttering Murdock” or “Susan the Stilt.” Often coming up with a nickname or even a derogatory name one child might call another is a great way to establish a character’s heart.

What can we say about Muttering Murdock? The best way to develop a character (or for that matter, any aspect of your story) is to start with loose thread and then ask questions. So, for ol’ Muttering Murdock, the name is the loose end just hanging out there for us to pull. We might ask, “Why does Murdock Mutter?” (That’s obvious, of course!) But what else might we ask? Is Murdock a human being? Is Murdock male or female? How old is Murdock? What attributes describe Murdock’s physical traits? How smart is Murdock? Does Murdock have any talents? What about hobbies, education, religious affiliation? And so on, and so on….
We don’t need to know the answers to these questions, we just have to ask them.

Why Does Murdock Mutter?

Next you want to shift modes. Take each question, one at a time, and think up all the different answers you can for each one. For example:

Why does Murdock Mutter?

1. Because he has a physical deformity for the lips.

2. Because he talks to himself, lost in his own world due to the untimely death of his parents, right in front of his eyes.

3. Because he feels he can’t hold his own with anyone face to face, so he makes all his comments so low that no one can hear, giving him the last word in his own mind.

4. Because he is lost in thought about truly deep and complex issues, so he is merely talking to himself. No one ever knows that he is a genius because he never speaks clearly enough to be understood.

You get the idea. You just pull out all the stops and be creative. See, that’s the key. If you try to come up with a character from scratch, well good luck. But if you pick an arbitrary name, it can’t help but generate a number of questions. If you aren’t trying to come up with the one perfect answer to each question, you can let your Muse roam far and wide. Without constraints, you’ll be amazed at the odd variety of potential answers she brings back!

How old is Murdock?

That was easy, wasn’t it. But now, think of Murdock in your mind…. Picture Murdock as an 18 year old, a 5 year old, an 86 year old, and at 37. Changes the whole image, doesn’t it! You see, with a name like Muttering Murdock, we can’t help but come up with a mental image right off the bat. It’s like telling someone, “Whatever you do, don’t picture a pink elephant in your mind.” Very hard not to.

The mind is a creative instrument just waiting to be played. It has to be to survive. The world is a jumble of objects, energies, and entities. Our minds must make sense of it all. And to do this, we quite automatically seek patterns. When a pattern is incomplete, we fill it in out of personal experience until we find a better match.

So, when you first heard the name, “Muttering Murdock,” you probably pictured someone who was in your mind already a certain gender, a certain age, and a certain race. You may have even seen Murdock’s face, or Murdock’s size, shape, hair color, or even imagined Murdock’s voice!

Give Murdock a Job!

Now ask one more question about Murdock – What is his or her vocation? Try out a number of alternatives: a school teacher, a mercenary, a priest, a cop, a sanitary engineer, a pre-school drop-out, a retired linesman. Every potential occupation again alters our mental image of Murdock and makes us feel just a little bit differently about that character.

Interesting thing, though. We haven’t even asked ourselves what kind of a person Murdock is. Is this character funny? Is he or she a practical joker? Does he or she socialize, or is the character a loner? Is Murdock quick to temper or long suffering? Forgiving, or carry a grudge? Thoughtful or a snap judge? Dogmatic or pragmatic? Pleasant or slimy of spirit?

Again, each question leads to a number of possible answers. By trying them in different combinations, we can create any number of interesting people with which to populate a story.

As we said at the beginning of the Murdock example, this is just one way to create characters if you don’t even have a story idea yet. But there are more! In our next lesson we’ll explore more of these methods.

1. Pick a favorite book, movie, or stage play. Make a list of all the principal characters.

2. For each character, list all the key bits of information the author reveals about that character, as if you were writing a dossier.

3. Do a personality study of each character, as if you were a criminal profiler or a psychologist.

4. For each item you have noted in your dossier and profile, create a question that would have resulted in that item as an answer. In other words, play the TV game Jeopardy. Take an item you wrote about a character like, “Hagrid is a large man, so big he must be part giant.” Then, create a question to which that item would be an answer, for example, “What is this character’s physical size?”

5. Arrange all the questions you have reverse engineered in an organized list to be used in the Writing Exercises.

2. Use your list of questions from the Study exercises to ask information about this character.

3. Come up with at least three different answers for each of the questions.

4. Pick one answer for each question to create a character profile.

5. Read over the list and get a feel for your new character. Then, swap out some of the answers (character attributes) that you included in the profile for alternative answers you originally didn’t use.

6. Keep swapping out attributes until you arrive at a character you really have a feel for.

You can easily build character in my StoryWeaver software.  All of the techniques outlined above (and many more) have been incorporated into a step-by-step interactive pathway for building your characters, plot, theme and genre.

StoryWeaver is just $29.95 and has a 90 day money back Guarantee, so give it whirl and create great characters! 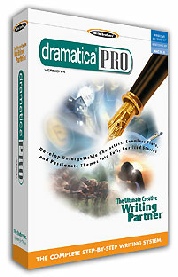 For a structural approach to building characters, nothing is more powerful or detailed that Dramatica Pro.  You’ll learn and then apply techniques for ensuring all structural attributes are present, breaking down archetypes into their component parts and reassembling them into more interesting characters, ensuring all character relationships are explored and fully developed.  Try Dramatica for 90 days, and if it doesn’t suit your writing style, return it for a full refund.

Watch the video below to learn more about creating characters in Dramatica software: