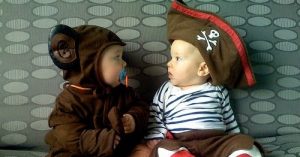 Some years ago, I wrote the following article describing the differences between the protagonist and antagonist archetypes.  Pretty good stuff – BUT…  Like any reasonably good teacher, I keep on learning – maybe not so much about the subject matter, but often a lot about how to present it better.

In this particular article I noticed a presupposition of mine – that in the story development process an author might create a whole cast of character but not have determined which ones are the protagonist and antagonist.

Now in reading this through today, I realize that doesn’t sound much like the way most writers go about creating their characters.  In fact, the usual approach is to start with a protagonist and antagonist in mind, then populate the story with supporting characters to fill out the conflicts and the logistics of the battle over the goal.

And so, while everything in my original article is still true and actually quite useful, the approach it takes of suggesting that you come up with your whole cast of characters first might very well turn away writers who might otherwise benefit from what the core of the article is actually about.

On the other hand, in other articles I have provided methods that support my approach of creating a cast first and then picking your protagonist and antagonist from them.  This works great when you are starting your story development from nothing more than a plot idea.

For example, suppose you want to write a story about an Amazon river boat running aground in the jungle, simply because the idea interests you.  Well then, you don’t have any characters at all yet.  And so, building a cast by working out who might be on the boat, who might be on shore and who might be coming up or down the river toward them would be a great first step.

Similarly, what if you are a character-oriented writer who just wants to come up with some interesting people to consider writing a story about them.  In this case, you may or may not even have a plot idea in mind.  But if you do, you can look into each of these characters you have created and imagine how the plot might evolve if each one, in turn, were chosen as the protagonist.  How does the course of the story change?  Would be goal be a bit different or a lot different?  Who would the best choice of antagonist be for each of your characters, should he or she be selected as your protagonist?

It was from this point of view that I wrote the article originally.  But now I realize that I just assumed that point of view, rather than stating it up front as a given for the sake of the article.  Hence, this opening section to make the point that this article is really about how the structural functions protagonist and antagonist have in a story, and how they interact with each other.

In summary, if you focus on the core information of the article, you can easily apply it to any character development approach you like to take with your own stories.

And with that as a caveat, here’s the article as originally written some year back:

Without a Protagonist, your story would have no directed drive. It would likely meander through a series of events without any sense of compelling inevitability. When the climax arrives, it would likely be weak, not seen as the culmination and moment of truth so much as simply the end.

In choosing which of your characters to assign the role of Protagonist, do not feel obligated to choose one whose Storytelling qualities make it the most forceful. The Protagonist does not have to be the most powerful personality. Rather, it will simply be the character who keeps pressing forward, even if in a gentle manner until all the obstacles to success are either overcome or slowly eroded.

When creating your own stories, sometimes you will know what your goal is right off the bat. In such cases, the choice of Protagonist is usually an easy one. You simply pick the character whose storytelling interests and nature is best suited to the objective.

Other times, you may begin with only a setting and your characters, having no idea what the goal will turn out to be. By trying out the role of Protagonist on each of our characters, you can determine what kind of a goal the nature of that character might suggest.

By working out an appropriate goal for each character as if it were the Protagonist, you’ll have a choice of goals. Developing the plot of your story then becomes a matter of choosing among options rather than an exercise in the brute force of creating something from nothing.

Functionally, the character you choose as your Antagonist will try anything and everything to prevent the goal from being achieved. No matter what the cost, any price would not seem as bad to this character as the conditions he or she would endure if the goal comes to be. The Antagonist will never cease in its efforts, and will marshal every resource (human and material) to see that the Protagonist fails in his efforts.

Without an Antagonist, your story would have no concerted force directed against the Protagonist. Obstacles would seem arbitrary and inconsequential. When the climax arrives, it would likely seem insignificant, full of sound and fury, signifying nothing.

Ask yourself which of your characters would have the most to lose or be the most distressed if the goal is achieved. That will likely be your Antagonist. But don’t discount the other candidates out of hand. In storytelling, characters are not always what they seem. Even the character who seems most aligned with the Protagonist’s purpose may have a hidden agenda that makes them the perfect choice for Antagonist. You might play such a character as an apparent aid to the effort, and later reveal how that character was actually behind all the troubles encountered.