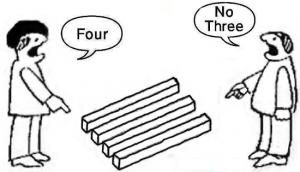 Perhaps the best way to instill real feelings in a character is to stand in his or her shoes and write from the character’s point of view. Unfortunately, this method also holds the greatest danger of undermining the meaning of a story.

As an example, suppose we have two characters, Joe and Tom, who are business competitors. Joe hates Tom and Tom hates Joe. We sit down to write an argument between them. First, we stand in Joe’s shoes and speak vehemently of Tom’s transgressions. Then, we stand in Tom’s shoes and pontificate on Joe’s aggressions. By adopting the character point of view, we have constructed an exchange of honest and powerful emotions. We have also undermined the meaning of our story because Joe and Tom have come across as being virtually the same.

A story might have a Protagonist and an Antagonist, but between Joe and Tom, who is who? Each sees himself as the Protagonist and the other as the Antagonist. If we simply write the argument from each point of view, the audience has no idea which is REALLY which.

The opposite problem occurs if you stand back from your characters and assign roles as Protagonist and Antagonist without considering the characters’ points of view. In such a case, the character clearly establish the story’s meaning, but they seem to be “walking through” the story, hitting the marks, and never really expressing themselves as actual human beings.

The solution, of course, is to explore both approaches. You need to know what role each character is to play in the story’s overall meaning – the big picture. But, you also must stand in their shoes and write with passion to make them human.

Click below to learn about my story consulting service:

Sometimes, no matter how one tries, a conversation cannot be turned.  Illustrating this in  conversations among characters is a way to illuminate the degree of power that is driving the conversation in a particular direction, or perhaps the magnitude of the potential behind it.

For example, my daughter is seven weeks pregnant and just posted the following note on Facebook with several additional responses:

Mindi (my daughter):  I thought pregnancy and pickle craving was a myth. I’ve nearly gone through a whole jar since yesterday.

My reply:  A jar of pregnancies?

Another person’s reply: Not even pregnancy made pickles taste good to me.

I tried to throw this conversation into a new direction, a new context, but the inertia of the social fabric drew the linear topics back to the original issue.  This is an initial indicator that those who follow my daughter on Facebook are likely not as interested in the branch in the process I moved down and are more interested in the more obvious subject of the original comment.

Conversational inertia is a hint – a whisper – that, while not definitive, is indicative of larger currents at work that move a conversation in a particular course no matter what winds blow across the surface.  The stronger and deeper the current, the greater the drive behind it.

Conversations may be between two people, in which case the inertia illustrates each individual’s underlying motivations.  In such a case, each may be speaking at cross purposes, as if two different conversations were chopped up and their pieces alternated linearly.  Such mechanisms can often be seen in the conversations between the Main and Influence characters as they each press forward with their own paradigms like two oarsman alternately rowing toward different destinations.

Conversations may be among several people in a group, in which case the inertia illustrates the underlying motivations of the larger Story Mind in which each individual represents a facet.  In such a case, there may be a single individual at odds with the group mind or the number of individuals may be split on which topic to follow, indicating that the Story Mind is literally of two minds, which functions as an analogy to our own individual mind’s when we can’t decide between two priorities or are torn between to equally attractive or equally unattractive alternatives.  In other scenarios, each individual may try to hijack the group conversation in his or her own desired direction, fragmenting the Story Mind and indicating that the collective is pulled in many direction or is simply directionless, is exploring or is going to pieces.

As a final thought for you Theory Hounds, this process is part of the Dynamic Model – the wave-driven undulations of narrative dynamics that give rise to growing motivations and repress or dissolve others.

You see it in your interactions with others and in the tides and eddies of your own mind and, therefore, you see it in stories as well.