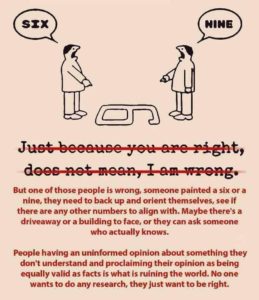 The message of a story comes from context. It is context that eventually convinces Scrooge that his way of looking at the world is incorrect. Yet, before he was shown the bigger picture, his personal experience presented quite a different picture.

The Influence Character in a story (the ghosts, in the case of A Christmas Carol) presents that alternative context, shifting their argument, act by act, as the Main Character tries to maintain his conclusions by side-stepping.

Eventually, the Influence Character will chase the Main Character’s reasoning around the block until there is nowhere left to side-step and he or she must face that bigger picture.

At that point – the point of climax in the personal journey of growth for the Main Character – he or she will either accept or reject this new context (either change or remain steadfast in their views) in a leap of faith, and the ramifications of that choice will determine if the story ends in success or failure.

To help with creating these context and developing the progressive conflict between the Influence Character and the Main Character, we developed Dramatica: the world’s only writing software with a patented interactive Story Engine that cross-references your answers to questions about your story to create a template for perfect story structure.

You can try it risk-free for 90 days at our web site at Storymind.com