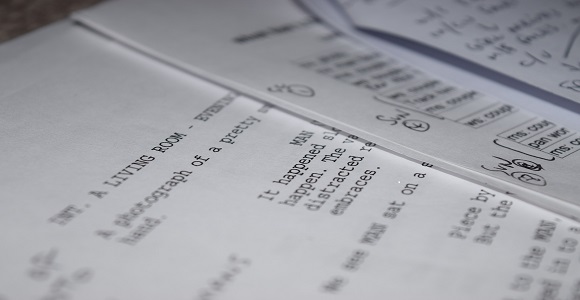 Screenplays are blueprints for movies. As such, they are not art, but instructions for creating art. Therefore, there are two things every great screenplay must have: A good story, and a clear and understandable description of how it should be told.

Through the years, a standard format evolved that serves as a template for presenting a screenplay in script form. In addition, certain techniques emerged that became accepted as conventions of telling a story on the screen.

In this tip, I’ll outline a few of those methods often present in most successful scripts.

Though not absolutely required, it is usually desirable to start your script with a teaser scene. This can be an intense emotional experience, a thrilling bit of action, or an offbeat introduction to a strange world. It might advance the plot, set the theme, and establish the time and location, introduce characters, or just serve as a roller coaster ride to get the audience involved.

Your audience is the cast, crew, and all the agents, readers, development executives or producers who may become involved in the purchase or production of your script. Your audience is NOT the people sitting in the theater. Like the old game of “telephone,” your purpose is not to tell a story but to tell other how to tell the story. And your purpose is not to impress movie goers, but to impress those who decide if your project will get the green light for production.

3. Don’t be overly literary in your scene description.

Many production personnel frown on anything but straight-forward prose. The purpose of a screenplay is to tell people how to tell a story, not to tell it yourself. Still and all, successful screenwriters often violate this rule because they can get away with it. And, if you are planning on directing the movie yourself, you may want to capture your intended mood. On the other hand, you don’t want those considering your project to be bored, or find your words too dry. So, the concept is to be as efficient as possible in conveying both the information in your story and the feeling of what it will be like on the screen.

Genres are guidelines, not rules. List your favorite genres; list your favorite elements in each genre. Then, gather together all the elements you might like to include in your script. Pepper them throughout your screenplay so that your genre develops, rather than being set at the beginning and then stagnating.

Break up all long speeches into back and forth conversation. Sure, there are exceptions to this, but in general, conversation is far more interesting both in sound and in how it can be presented visually.

Have you ever seen one character tell another, “He’s at Dollar-Mart, you know, that big national chain store?” If it were so big and national, the other character would already know this information! One of the best ways to drop exposition is in an argument. You can then exaggerate and bring out information a character might already be expected to know by using it as a weapon. And for simple exposition, try billboards, newspapers, answering machines, photos on mantles, two people talking about a third, and any other technique that doesn’t hit the audience over the head or smack of cliche.

You should have a message, but don’t present it as a one-sided statement. Rather, show both sides. If you are interested in passing judgment on Greed, also show Generosity. Never put them both in the same scene side by side, but make sure the audience gets to see how well each side does on its own in at least once scene each per act. In the end, the audience will sum up all the instances in which they saw how each side performed, and will draw their own conclusions (that you have craftily led them to).

8. Give your Main Character a personal issue as well as a goal to accomplish.

A story with nothing more than a logistic quest, while perhaps thrilling, is heartless. Your Main Character should grapple with an issue that pressures him or her to consider changing their mind, attitude, or nature in some way, large or small. And don’t just present the personal problem and then resolve it at the end. Unless you argue it (usually through another character who is philosophically or morally opposed to the Main Character’s view) the ultimate change or growth of your Main Character will seem tacked on and contrived.

9. Characters don’t have to change to grow.

They can stick to their guns and grow in their resolve. There are two types of characters, those who change their natures (or minds) in regard to some issue, and those who stick it out and hold on to their views. The obstacles in a story drive a character to the point of change, but whether or not he or she will change is the issue, after all. Sometimes they should change and don’t. Other times they shouldn’t and do. Each of these presents a different message, and is less overused than the character who should change and does, or shouldn’t and doesn’t.

10.There are many kinds of endings

A character might change and resolve their personal angst, yet fail in their quest as a result. Was it worth it? Depends on the degree of angst and the size of the failure. Another character might not resolve their angst; yet by refusing to change accomplish the goal. And even if they do accomplish the goal, it might have been a misguided thing to do, and is actually quite bad that they were successful. The character might not have been aware that the goal was a bad thing, or they might fail to achieve a good thing.

In addition, goals might be partially achieved or only small failures, and a character might resolve only part of their angst, or just slightly increase it.

The flavor of the movie will ultimately depend on how all these elements stack up at the end and offer a palette of shadings, rather than just Happy or Sad, and Success or Failure.

Armed with these ten screenwriting tips, your next script can be richer and snappier.

May the Muse be with you!