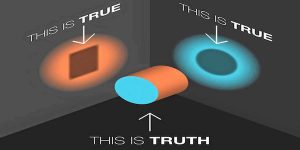 Of course, one is more sensitive to the most recent patterns, so an equal number of false items (or alternative truths) is not really required when one is aware he has entered a new situation. However, situations often change slowly and even in ways we are not aware. So context is in a constant state of flux. If something has always proven true in all contexts up to this point then one is not conscious of entering a whole new context. Rather, as we move in and out of contexts, a truism that was ALWAYS true may now be true sometimes and not true at other times. It may have an increasing or decreasing frequency of proving true or may tend toward being false for a while, only to tend toward being true again later. This kind of dynamic context requires that something be seen as false as often as it has been seen as true in order to arrive even at a neutral point where one perspective is not held more strongly than the other.

Let me now add a short conclusion to this excerpt from the Dramatica Book….

And finally, you may wish to support this poor philosopher and teacher of narrative by trying my Dramatica Story Structuring Software risk-free for 90 days, or my StoryWeaver Step By Step Story Development Software, also risk-free.