My Hero – Unmasking Your Main Character 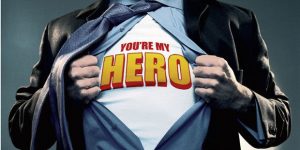 Every author has a hero – that one special character their story revolves around.  But who is this guy (or gal, or thing or ?)  Why he’s your main character, that’s who.  And he’s also your protagonist.  And he’s your central character.  And he’s a good guy (unless he’s an anti-hero, in which case he might be a bad guy, a troubled guy in a story of redemption or, as Jessica Rabbit said in Who Framed Roger Rabbit, “I’m not bad, I’m just drawn that way.”

But in a practical sense, what do we really know about your hero, his attributes, and how he functions in your story structurally?  To find out, let’s look at each of htese different facets of your hero one at a time.

1. Your Hero is the Protagonist

2. Your Hero is the Main Character

3. Hour Hero is the Central Character

The Main Character is the most empathetic character – the one with whom the reader or audience most closely identifies: the character the story seems to be about.

The Central Character is the most prominent one – the player who stands out above all the others and steals the show.

Putting it all together then, a typical hero drives the story forward, represents the audience position in the story, is the most prominent character, and tries to do the right thing.

A list of typical heroes includes Harry Potter, Luke Skywalker, Katniss Everdeen and, of course, Superman.  Anti-heroes (and those in stories of redemption) include Scrooge, Captain Jack Sparrow, Deadpool, and Gru in Despicable Me.

The four heroic attributes we delineated above aren’t necessarily tied together into one person. In fact, they can be swapped for other attributes, distributed among several characters and put together in different ways!

For example, suppose we change one attribute of the stereotypical hero to create a character with the following four qualities:

Now we have the typical anti-hero (in the popular vernacular). Such a character would drive the plot forward, represent the audience position in the story, be the most prominent, but represent a negative moral outlook or ill intent.

James Bond is such a character. He did not instigate change; he is responding to an effort begun by the villain! In almost every Bond story, the villain is actually the driver of the plot – the proactive one – the Protagonist by definition, though clearly a bad guy, while James Bond is perpetually trying to put an end to the evil scheme.

As you can see, though typical heroes are just fine, if  mix them up a bit, you create all kinds of opportunities to develop far more interesting characters who are just as viable in your story’s structure, but is unexpected fresh ways.

This entry was posted in Heroes & Villains. Bookmark the permalink.