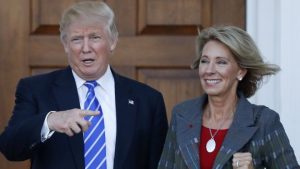 Narratives are constantly at work in the real world, in business, social movements, and politics.

A good example of this is in the nomination and ultimate selection of Betsy DeVos as Secretary of Education, as follows:

There are many fine Republican educators with higher degrees in education who have worked as teachers, principals or on boards of education. And the vast majority of these also went to public schools as well as their children.

By comparison, President Trump’s selection, Betsy DeVos, has no degree at all in education, never worked as a teacher, principal or on a board of education, and never went to pubic school and neither did any of her children.

Let’s see if we can come up with a strong narrative to support Trump’s selection of DeVos over any of these other potential Republican candidates.

If I were working for the White House writing such a narrative, I wouldn’t base it on her qualifications, since so many other Republicans are clearly so much better qualified.  Therefore, she is easily provable as not the best choice based on qualifications.

So what other attributes can we point to as justification for her selection?

Well, we might say that she is very passionate about the public school systems she will oversee. That’s a good start because it is general, not dependent on qualifications, and impossible to disprove.

Of course, it isn’t likely she is really the most passionate person in regard to public education, since she has never actually spent much time involved with it in any major way before, and since many other far better qualified Republicans who HAVE degrees in education and HAVE made a career of education are likely to be at least or even more passionate about it than she.

That doesn’t work well as a believable narrative either.

So let’s try making an argument for her based on her views on public education. Well, she’s not unique in those, and there are many better-qualified Republicans with equal or greater passion for education who share exactly her same views.

Why, then, did Trump choose her above all other better-qualified Republican educators with the same views and equal or greater passion for the topic?

Sometimes the wisest use of narrative is to determine where the story really lies as opposed to where all the attention is going.

This is real world narrative.

Want to improve your organization’s use of narrative?

Contact me about real world narrative
education, analysis and creation