In this technique, things not only appear more or less important, but actually become so. This trick was a favorite of Hitchcock in such films as North By Northwest and in television series such as MacGyver. In an episode of The Twilight Zone, for example, Mickey Rooney plays a jockey who gets his wish to be big, only to be too large to run the race of a lifetime.

Usually things become more (or less) important as a result of their implications or of changing contexts.  As the old saying points out, “for want of a nail the horseshoe was lost” and eventually, because of that lacking nail, the entire war was lost.

Someone might have an allergy that is an annoyance until it helps authorities locate a device planted by terrorists.  Someone whose only claim to fame is that they can hold their breath longer than anyone else might survive to rescue others in a room filling with smoke.

Or, on the contrary, a doctor whose entire knowledge-base and clientele revolves around treating an incurable disease might find themselves without value when a cure is unexpectedly discovered.

The fun part of this technique for a writer is that you have the option to play the very same thing as becoming important or becoming unimportant or even having it flop back and forth.  For example, an electronic currency trader may suddenly find himself without value in a zombie apocalypse, only to discover that his skill for tracking subtle patterns allows him to predict the movements of the zombie herd, only to be without value once again when the herd mutates and becomes chaotic in their movements.

So, to liven up a story, look for opportunities both close to the core of your story, such as with Mickey Rooney as that jockey, and also look for fun changes of fortune (of importance or value) not only for characters with unique traits or skills, but also for items as in MacGyver or that infamous horseshoe nail.

The perfect balance between heart and mind 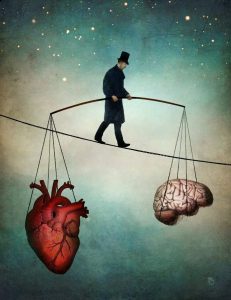