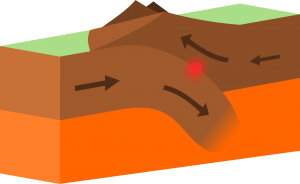 Think of the large structural elements in a story as tectonic plates in geology that push against each other driven by an underlying force. In geology that force is generated by currents in the mantle. In stories, that force is create by the wound-up justifications of the main character that puts him or her in conflict with their world at the point the story begins.

Sometimes, in geology, this force gradually raises or lowers land in two adjacent plates. Other times it builds up pressure until things snap all at once in an earthquake. So too in story psychology, people are sometimes slowly changed by the gradual application of pressure as the main character’s justifications gradually unwind through experience. Other times the pressure applied structure just builds up until the character snaps in Leap Of Faith – that single “moment of truth” at the climax in which a character must decide either to change his ways (or outlook) or stick by his guns believing his current approach is stronger than the pressure bought to bear against him, believing he just has to outlast the forces against him to ultimately triumph.

All of these variations result in four basic kinds of growth arcs for your main character: A gradual change over time, a gradual strengthening of his resolve, an abrupt change in a leap of faith at the climax, an abrupt decision not to change.