Working on a new dynamic model of narrative to complement the structural model of Dramatica.  Coming up with some interesting thoughts about Timelock and Optionlock as defined in Dramatica and expanded into dynamics.

Timelock in Dramatica is defined as having a narrative come to a climax because it runs out of time – either a deadline or an amount of time, even if spread out non-continously.

Optionlock is defined as running out of options, such as “three wishes” – when the last one is made, it’s over.  But it can also be making something large enough or small enough, such as trying to get enough hot air into a balloon to take to the skies before the cannibals arrive.

Deadline – you can retire at 60 and get social security, but each year you wait up until age 70 you will get more per month for the rest of your life.  But, if you retire anytime after 70, you won’t get any additional beyond the maximum.  What kind of lock is that?  Perhaps a combination of timelock and optionlock, or is it best looked at as “optimal time” – or some sort of time constriction rather than a lock?

Early man was almost all optionlock.  The seasons are more conditions than specific times.  Even looking at a solstice being marked by ancient stones, is it really a time or set of conditions.  Timelock requires a regular repeating time that is independent of what is being measured and used as a temporal measuring stick.  So, a solstice or equinox is what is being measured and cannot therefore also be the measuring stick.  Planting and harvest are not tied to solstice and equinox, but are around them, one way or the other, more analog than discrete.

Sundials provide true timelocks, but hour glasses do not, unless they are truly an hour, calibrated against a sundial, for example.  Otherwise, they can be arbitrary in time and are optionlock devices instead, such as “when the sand runs out.”

Timelock thinking is more natural for men who think in discrete terms, than for women who think in more analog terms – one is particle, the other wave, linear logic vs. holistic logic.  This, of course, is only dictated by biology at the preconscious level. The other three “levels” of the mind (subconscious, memory, and conscious) are determined to be timelock or optionlock by experience, training, and choice, respectively.

Optionlock thinking is more geared toward child rearing (when child is hungry, when it is sleepy) – Timelock is geared more toward goals, first this, then that or, as would be the case with primitive man, timelocks were of a lower resolution such as before, now, after.

Inner city culture is more optionlock – poverty leads to optionlock thinking as any one time is as good as another, conditions more important, tune into the rhythms of the city.  Sensing danger an opportunity as an ebb and flow, rather than clocking it against an objective measure.  Much more like primitive man, in touch with the earth.  A complex society becomes so awash in tiny discrete elements that comprise its systems that at the bottom, they cease to be perceived as structures and are connected to as dynamics.

Blue collar work requires timelocks.  Those in poverty live and are trained in optionlock. This provides an effective barrier to improving one’s condition is that the non-working class below blue collar cannot perform to timelock expectations, preventing them from taking regular work, leading to the opportunities being day labor, migrant labor, gang membership, or joining the military.  The military is an optionlock organization in which one is “on” all the time, and do whatever is asked whenever it is asked.

On the other side of blue collar the white collar folk are all optionlock.  They are usually the more intelligent because in school, tests are timed.  The smartest never learn the timelock because the usually finish before the time limit, so they are not trained out of optionlock thinking, which is inherent to children and only abandoned when one moves away from the here and now to consider consequences and long-term benefits.  Makes corporate leaders more like children, reaping what they can now, and the hell with later.

To reform society must be aware of time/space strata and their connection to social strata.

Beyond Dramatica – available for Kindle 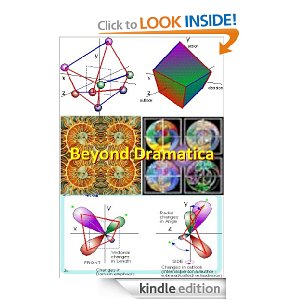