The Relationship of Author to Audience (Theory)

Here are some scribbles Armando Saldaña Mora, Chris Huntley and I jotted down one day a couple years ago at Chris’ house.  I was staying over that night and at the time Armando (author of “Dramatica for Screenwriters” was a longer-term houseguest.  I thought it would be fun to include him in the development of some new theory, as previously only Chris and I had added to the edges of Dramatica.

So, I suggested we do some work on the TKAD (quad relationships at work among author, audience, and story).  We started in the upper left and worked to the right.  Along the way, Chris came downstairs and added his two-cents worth.

The result is documented in the scan below.  This was just a first stab at these relationships, and looking at it now, I’m pretty sure some of them are wrong.  Haven’t taken the time to figure out which ones though.

As always, the problem is keeping a consistent perspective throughout any section of the theory model so that it has a consistent bias, rather than a progressive one.  So, while these all look “okay,” I’m pretty sure the perspective is drifting.

You Dramtica Theory Hounds out there might enjoy working this out to completion, which is why I am publishing it. 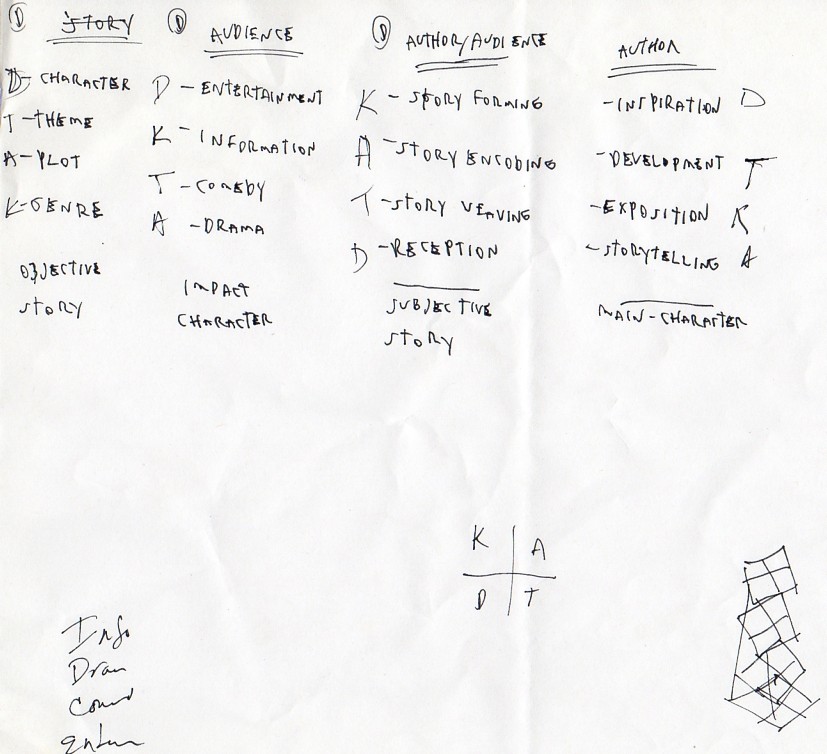 This entry was posted in Author & Audience, Under Development. Bookmark the permalink.