Unlike my usual articles, this piece is not intended to document an existing part of the Dramatica theory nor to reveal a part newly developed.  Rather, I will be sharing my speculations on a life-long thought problem of mine and, toward the end, provide a new way of looking at some old issues.

The subject of this line of inquiry is that “magic moment” when one binary state changes into another.  To illustrate, consider a light switch.  We can tell when it is on and when it is off.  We can recognize when it has changed state from one to the other.  But what happens at that moment between the two when it is neither on nor off, or perhaps both?

This is really a restating of the uncertainty principal or even of Zeno’s Paradox or Schrodinger’s Cat, for that matter.  It touches on the potential for faster than light travel, black holes, and synchronicity.  But for me, personally, it is at the heart of the issue that has driven me since childhood with a specific curiosity that led to the development of Dramatica and still propels me today into my ongoing work on narrative dynamics.

For me, the quest began at age four or five – sometime before kindergarten – while I was on my swing set in the backyard of our home in Burbank.  This would be, perhaps, 1957 or early 1958.

I remember the moment as if it were yesterday, for it has motivated (plagued) me since it occurred.  It was a seamlessly gray overcast, that day, and as I was swinging I wondered if I could get high enough so that my entire field of vision was filled by nothing but that flat gray sky – no trees, no birds, not the neighbor’s houses nor the edges of my swing or its suspending chains.

So, I set about rocking myself higher and higher to the point I became fearful the whole contraption would collapse upon me, assuming I didn’t just fly off into space from the force.

Nonetheless, I persevered, and finally (fortunately) I rose high enough at the apex of the arc and for just one glorious instant I achieved my seamless gray experience.  As the swing set was by that time wobbling menacingly, I quickly brought myself back to rest.

And I sat there for a bit when a question arose in my young mind: If nothing existed at all, would it look black because there was no light or gray because there also no dark?  This is, of course, just another version of “if a tree falls in the forest,” but I had never heard that one, so this was news to me.

I pondered the question for a long time (for a child with a short attention span), thinking about it from both sides.  And then I had the thought that has haunted me and pretty much cast the cut of my jib for the remainder of my days (so far).  This unbidden query rose into my conscious mind: “Why can’t I figure out which it would be?”

Now that’s an awful thing for the universe to do to such an innocent kid –  a carefree (until then) child who might have just breezed through live with a 9 to 5 and weekends to play.  But once that thought was there, it would not leave.

I kept thinking about it, for days on end.  My first assessments were along the lines of, “Well it must be either black or gray.  Okay.  But why can’t I figure it out?”  You see it wasn’t the paradox itself that bothered me but the very concept of paradox – that my mind was not capable of discerning the answer, for I was sure there must be one.

In later years, I began to speculate whether God knew the answer to whether it would be black or gray.  Surely he must; He’s God, after all!  But if he does, then why did He make me in a limited sort of way, unable to see the truth of it.  And if that is the state of affairs, then how can I be sure of anything, for I’m not graced with the whole picture!  What good is it, then, to try and know anything, to try and find any meaning at all, for it is all based on a partial access to the capacity to understand the universe and therefore any conclusions are inherently suspect and likely to be overturned if we are given full access to reality when we die and go to heaven.  (Which was where my young mind took me at the time.)

Seeing the truth after death was my only hope, because if that was not the case, then I was by nature locked in a limited mind incapable of truly understanding the universe in which it existed.  Obviously, I paraphrase, but those exact lines of reasoning were coursing through my brain to me continual dissatisfaction.

So, being rather enamored of my own cognitive abilities at the time (a trait I’ve seen no reason to alter over the years), rather than imagining myself as a hero with super powers, I imagined myself as a hero with mental powers – the one individual in the history of the planet with the capacity to answer that blasted question: “Why is it that our minds are not capable of resolving paradoxical questions?”  Which later evolved into “What is the difference between observation and perception,” “How do logic and emotion affect one another,” “What is that magic moment between one binary state and another,” and, currently, “What are the physics of the interface between structure and dynamics?”

And so, you see, the same insidious line of inquiry vexes me yet today in my attempts to develop the dynamic side of the Dramatica theory and to describe how the two sides impact one another and work together – an analog of our reason and emotion, and the holy grail (as I see it) of both universe and mind and, quite naturally by extension, of the relationship between universe and mind.

Sorry.  I hadn’t intended to go into such a detailed back story, but my decades long frustration with this pesky query oft gets the better of me.

Having set the stage, let’s get down to the heart of the matter.  What can we know about this limit line or interface between structure and dynamics beyond which neither can venture yet which also connects them both so that they influence one other across that great divide? 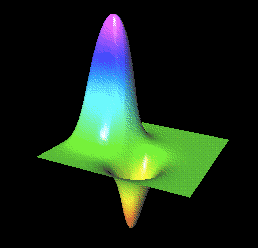 Let’s visualize the interface.  Imagine one of those 3D computer images that shows a flat plane with peaks and troughs on it, like mountains and gravity wells – essentially round-topped cones like stalagmites and stalactites, above and below the plane.

Structure takes a horizontal cross section of the cones, as if a pane of glass were placed above or below the plane.

This cross section results in a flat image with a number of circles on it.  Each circle is seen as a separate object and its edges define its extent.  Taken together, the circles form a pattern, and it is that arrangement by which structure seeks understanding.

Dynamics takes a vertical cross section of the cones as if a pane of glass were placed perpendicular to the plane.

This cross section results in a flat image with linear wave forms on it.  Each curve is seen as a separate force with its line defining its frequency.  Taken together, the wave forms create harmonics, and it is that arrangement by which dynamics seeks understanding.

Just as if you look at a scene with one eye and then the other, you now have all the information you need to create 3D, but neither eye can see it alone.  In fact, only if both eyes are looking at the same moment at the same thing (space and time in synchronicity) can the  whole of the thing be appreciated.  But even then, it is only an approximation of the true three dimensional nature of what is being viewed, made up of a left and right slice merged together.

And herein lies the essence of the paradox of mind that has hung over my head for all of these years: structure gives us one partial view of a larger Truth and dynamics give us another.  Neither view is wrong; each is incomplete.