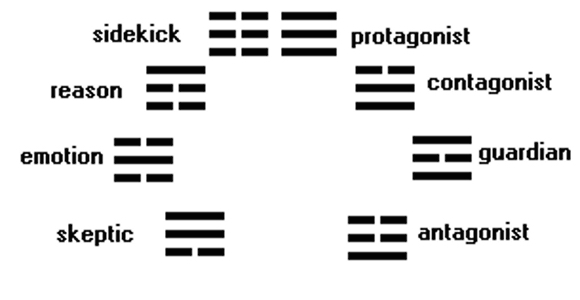 A career psychotherapist recently wrote me about a method he is developing to employ theater in the therapy process, including an association with the I Ching.

Many years ago he had encountered our Dramatica Theory of Narrative and noted a similarity between the elements of Dramatica and the I Ching and wished to discuss the issue.

Here is my reply:

Many years ago, a couple of folks noticed a correlation between Dramatica and the I Ching, and they independently prepared two articles about their findings.

Here’s a link to the first article, which focuses on an I Ching perspective of the 8 Dramatica archetypes:

Here is a link to the second article, which breaks down the elements of the archetypes into specific trigrams:

I, myself, did a small amount of passing research into the Pristine Y King, which is ostensibly an early unpoliticized version of the the I Ching, and found that our chart of the 64 elements matched up by nature almost perfectly with the 8 x 8 chart of the I Ching hexagrams.

My conclusion was that the I Ching and Dramatica are both looking at the same natural phenomenon and simply describing it in two different but similar ways.

But where did this set come from in the first place, and what is the natural phenomenon it seeks to describe?

To that end, in the later years of my active career as a narrative theorist, I discovered a process of group psychology that I believe explains how and why that set of elements has come to be.

Here is a link to that article:

So, a model of narrative is tantamount to a model of the mind itself including both a documentation of the process of individual coping and problem solving and also of one’s interactions and roles as part of multiple groups and multiple narratives.  Internal and external narratives – that is the key and that is the driving force and nature of the elements of Dramatica and those of the I Ching.