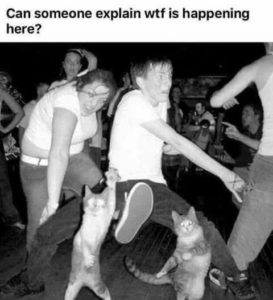 This is actually pretty easy to explain.

The cats in the front are feline overlords. They were testing a new human control virus on the people in the so-called “party” (Humans got a fake invitation to a pseudo-party where the drinks were spiked with FeCV (Feline Control Virus)).

Anyway, the cats in the front of the photo are contorting themselves to see if they can get the humans to do the same thing; the humans, forced to attempt to comply, are trying their best even though it’s causing some of them great pain (clearly). The female in the back of the photo with her hand on her head has just come in and hasn’t had a drink yet. She is clearly astonished at what she sees. Of course the infected humans not dancing are controlled to pretend nothing unusual is happening …

I saw this once before. I believe it was 1962, San Diego CA. There were no … HUMAN survivors. (No cats were found either, but we all know just how crafty the little bastards are.)

So far their experiments have not been successful – in fact I thought they had given up on it. The photo you have presented is clear evidence they haven’t stopped trying.

I have been instructed to tell you it is a photoshopped collage of people and animals. Nothing usual in the slightest ever happened. Please disregard what were clearly insane ramblings.