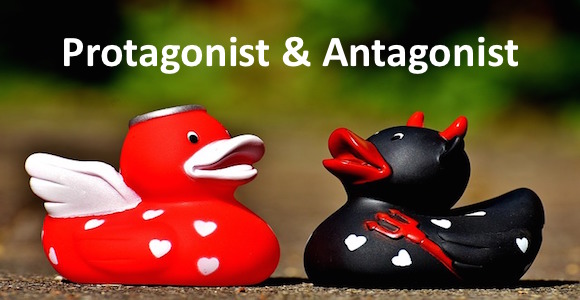 But good and evil are not part of what a Protagonist or Antagonist is. They are just qualities our culture often associates with the achiever and the stopper.

For example, consider where good and evil reside in a typical James Bond movie.  Usually, it is the bad guy who hatches a plan and then sets off to realize it.  And it is Bond who must try to stop the bad guy and set things right.

So if, for a moment, we remove the preconception of a Protagonist being good and an Antagonist being bad, we might ask ourselves, where exactly do these two characters come from and how do they work dramatically in story structure?

Without a Protagonist, your story would have no directed thrust. It would likely meander through a series of events without any sense of compelling inevitability. When the climax arrives, it would likely be weak, not seen as the culmination and moment of truth so much as simply the end.

Still, do not feel obligated to fashion a Protagonist whose storytelling qualities make it the most forceful character. The Protagonist does not have to be the most powerful personality. Rather, it will simply be the character who keeps pressing forward, even if in a gentle manner until all the obstacles to success are either overcome or slowly eroded.

When creating your own stories, sometimes you will know exactly what your goal is right off the bat. In such cases, the choice of Protagonist is usually an easy one. You simply pick the character whose storytelling interests and nature are best suited to the objective.

Other times, you may begin with only a setting and a cast of interesting characters but have no idea what the goal of the story will be. By trying out the role of Protagonist on each of your characters, you can determine what kind of a goal the nature of each character might suggest.

By working out an appropriate goal for each character as if it were the Protagonist, you’ll have a choice of goals. And once you have chosen one as the story goal, each of your other characters now has a clear motivation of their own – a tangible end-game they are hoping to achieve for themselves as a result of their part in the effort to achieve the overall story goal.

Functionally, the character you choose as your Antagonist will try anything and everything to prevent the goal from being achieved. No matter what the cost, any price would not seem as bad to this character as the conditions he or she would endure if the goal comes to be. The Antagonist will never cease in its efforts and will marshal every resource (both human and material) to see that the Protagonist fails in his efforts.

Without an Antagonist, your story would have no concerted force directed against the Protagonist. Obstacles would seem arbitrary and inconsequential. When the climax arrives, it would likely feel insignificant, full of sound and fury, signifying nothing.

In summary, while you may find it easier to write by thinking in terms of good guys and bad guys or heroes and villains, be sure to step back every once in a while and consider the underlying dramatic functions represented by the Protagonist and Antagonist regardless of noble or ill intent.