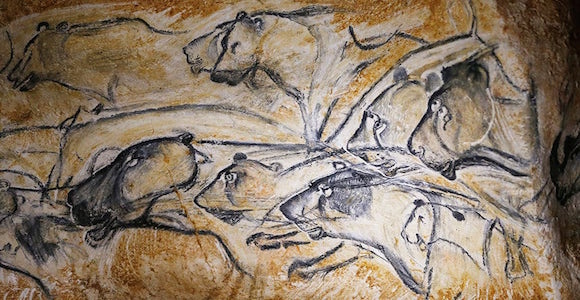 Imagine the very first storytellers. Actually, what they told would certainly not be considered a story by today’s standards. Rather, they probably began with simple communications with but a single meaning at a time.

Even animals recognize a cry of pain or a coo of love from another creature, even across species. So it is not a great leap to imagine that rather than just crying out in immediate response, early man might have come to intentionally make sounds to indicate his physical and emotional conditions. Ask any cat or dog owner if their pets don’t speak with them!

Nevertheless, a grunt, coo, scream or growl does not a story make. First we need to ratchet things up a bit and take one small step away from simple sounds that have direct physical or emotional meanings.

For example, if you are hungry you might make a “longing” sound and point at your belly with a wistful pointing motion. As simple and silly as this seems, it is actually quite a leap in communication. No longer are we tied to single symbols or single experiences; not we can string them together to create more complex meanings.

What about jumping up another level and stringing a few complex meanings together? Well, before you know it, early humans were chatting in non-verbal sentences, describing journeys, experiences, and even warnings.

And, of course, language would evolve as more and more people had more and more to say and discovered the benefits of a common vocabulary.

Now such a sophisticated communication is still not a story. But it is a tale. A tale is simply a statement that starting from a particular place and state of mid, if you follow a particular path, you’ll end up at a particular destination.

That’s what fairy tales are all about. Paraphrased, they all basically say, “If you find yourself in a given situation, you should (or should not) follow this given path because it will lead to something good (or bad).

Of course, the very first tales were probably true stories about someone’s encounter with a bear or directions to find the berry bush that makes everything look funny when you eat them. But it wouldn’t take long or our early storytellers to realize that they could create fictions that summed up the value of their experience in a single, message-oriented tale.

But beyond this, a clever storyteller with an agenda might realize that he could influence people to take (or avoid taking) particular actions in specific cases. No longer were tales just descriptions of real events, means of imparting the value of experience, or entertaining fictions. Suddenly then became a tool with which to manipulate others.

To do this, there must be no gaps, no missed beats, no emotional inconsistencies. And in addition, the tale must be captivating enough to grab and hold the intended audience – to pull them in and involve them so deeply that they are changed by the experience.

And yet, despite all its power, the tale has limitations. Primary among these is that the tale speaks only to a single specific situation and a single specific course of action. So, as a storyteller, you’d need to fashion a whole new tale for each specific path you wished to “prove” was a good one or a bad one.

But wouldn’t it be far more powerful to prove not only that a path was good or bad but that of all the alternative paths that might have been taken, the one is question is the best or worst?

Now, the simplest way to do this is to simply say so. You write a tale about just one course taken from a given situation, and then state at the end that it is the best or worst. So, rather than being a simple statement, this new kind of tale has become a blanket statement.

If your tale is being told just to your own village, to the people you grew up with, then there is a good chance they will accept such a blanket statement since your tale probably reflects a local truism – some “given” that is already accepted by your audience as true. The tale simply serves to reinforce existing beliefs, and at the end everyone nods their heads in agreement with the outcome.

But what happens when the tale is told in another village. What if their givens are not the same. There may be one or two in the crowd who question the storyteller and ask, “I can see why that path is good, but why would it be better than xxxxxx?”

When confronted with an alternative approach, the storyteller might then briefly describe how the suggested path might unfold, and why is it not as good (or bad) as the one presented in the tale itself.

Again, being among friends (or at least among those who share a similar if not identical world-view) they will likely be easily convinced. And, it is also likely that due to that similar outlook, only a few alternative paths might be suggested, and all rather easily dismissed.

The development of story structure probably languished in this form for centuries, as nothing more advanced or sophisticated was really needed.

Enter that advent of mass media. As soon as books began to circulate across micro-cultural boundaries, ad soon as plays were performed in traveling road shows, to important things happened that forced the further development of the tale into what has ultimately become the structure of story.

First, the audiences became wide, varied and was no longer drawn from a homogeneous pool of consensus. Rather, they cam from many walks of life, with a variety of beliefs and agendas. And so, as the tale traveled, blanket statements were not nearly as easily accepted. Many more alternative approaches would be suggested or considered individually by audience members. So, such a tale would be considered heavy-handed propaganda and discounted unceremoniously.

And second, due to the mass distribution of the tale, the original storyteller would not be present to defend his work. Whatever other paths might occur to the audience would not be addressed, robbing the work of its previous ability to be revised on the spot as part of the performance.

In response to this reception, many authors no doubt retreated from the blanket statement form of the tale to the simple statement, thereby avoiding ridicule and strengthening the power of the tale. After all, is it not better to make a smaller impact than no impact at all?

And yet, there were some authors who took another tack. They tried to anticipate the alternative approaches that other audiences might suggest, and took the radical step of including and disposing of those other paths in the tale itself. A brilliant move, really. Now, even when the storyteller wasn’t physically present, he could still counter rebuttals to his blanket statement.

Of course, the key to the success of this approach is to make sure you cover all the bases. If even one reasonable alternative is left un-addressed, then at least part of your audience won’t buy the message.

As mass-distribution moved tales farther a field from the point of cultural origin, more and more alternatives we required. By the coming of the age of recorded media, a tale might reach such a wide audience and cross such boundaries that every reasonable alternative would come up sometime, somewhere.

Eventually, the tale had been forced to grow from a simple statement, to a blanket statement, to a complete argument incorporating all the ways anyone might look at an issue. This effectively created a new and distinct form of communication that we recognize as the story structure we know today.

By definition then, a tale is a statement and a story is an argument. And in making that argument, the structure of a story must include all they ways anyone might look at an issue. Therefore, it certainly includes all the ways a single mind might reasonably look at an issue. And, effectively, the structure of a story becomes a map of the mind’s problem solving processes.

No one ever intended it. But as a byproduct of the development of communication from simple tale to complex story, the underlying structure of a story has evolved into a model of the mind itself.

Back in 1991 my writing partner Chris Huntley and I set out to document that model of the mind as a means of discovering the elements that would ensure perfect story structure.  The result was a whole new theory of narrative called Dramatica.

We published our findings in a book, Dramatica: A New Theory of Story, and along with our partner Stephen Greenfield, developed a software tool (also called Dramatica) that employs the theory to help writers structure their novels or screenplays.

You can read all about the theory and how we developed it here, and you can check out the Dramatica software and all our products and programs for writers here.