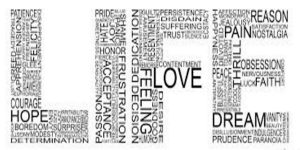 A tale is, perhaps, the simplest form of storytelling structure. The keyword here is “structure.” Certainly, structure isn’t necessary to communicate powerful feelings as a montage of experiences.  One can still relate a conglomeration of intermingled scenarios, each with its own meaning and emotional impact. Many well-known works of this ilk are considered classics, especially as novels or experimental films.

Nonetheless, if one wants to make a point, you need to create a line that leads from your premise to your conclusion. A tale, then, is a sequence of dramatic elements leading from the point of departure to the destination on a single path.

A story, on the other hand, is a more complex form of structure. Essentially, a number of different story threads are intertwined around one another, much as a artist might weave a tapestry. Each individual thread is a tale that needs to be spun, making its own internal message complete, unbroken, and possessing its own sequence. But collectively, the messages of all the threads come together in a single, overall pattern in the tapestry of the story, much as the scanning lines on a television come together to create the image of a single frame.

In story structure, then, the sequence of events in each individual thread cannot be random, but must be designed to do double-duty – both making sense as an unbroken progression and also as pieces of a greater purpose.

To be a story thread, a sequence of dramatic elements must have its own beginning, middle, and end. For example, every character’s growth has its own thread. Typically, this is referred to as a character arc, especially when in reference to the main character. But an “arc” has nothing to do with the growth of a character. Rather, each character’s emotional journey is a personal tale that describe his or her feelings at the beginning of the story, at every key juncture, and at the final reckoning.

Some characters may come to change their natures, others may grow in their resolve. But their mood swings, attitudes, and outlook must follow an unbroken path that is consistent with a series of emotions that a real human being might experience. For example, a person will not instantly snap from a deep depression into joyous elation without some intervening impact, be it unexpected news, a personal epiphany, or even the ingestion of great quantities of chocolate. In short, each character’s throughline must be true to itself, and also must take into consideration the effect of outside influences.

Traditionally,  writers would haul out the old index cards (or their equivalent) and try to create a single sequential progression for their stories from Act I, Scene I to the climax and final denouement.

So, bottom line:  you spin a tale or you can weave a story, but if you want to convey a complex message, you need to ensure that every thread is not only a quality one, but that they all work together to create a greater meaning.