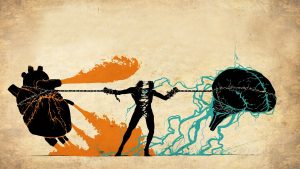 Consider the Main Character and the Influence Character who, it would seem at first blush, are as opposite as they can be in regard to  some underlying philosophical perspective, world view, belief system or moral code.

These two “opposing” viewpoints are not about arguing “apples and oranges” but about one arguing they are nothing alike because one is an apple and the other an orange, and the other saying no, we are both alike because we are both fruit.  You see, duality is misunderstood when it assumed to be “black or white,” “hot or cold,” “good or evil.”  It is really a matter of how we classify ourselves – as different people on the same team or as members of different teams.

Are you familiar with the four kinds of character relationships – Dynamic, Companion, Dependent, and Associative?  That part of the Dramatica theory has much to inform a new way of looking at duality.  Here is a link on that concept, and then some more commentary:

The relationship between the Main and Influence Characters is really that of the fourth kind of relationship – the Associative, in which its members are either seen as Components – Independent agents (apples and oranges), or as a Collective in which they are all part of the same family (fruit).

So duality does exist, but it is not as simple as saying for every ounce of good energy there must be an equal and opposite bad energy somewhere to balance it out.  Nothing is good or evil in and of itself.  It is all context dependent, but the sticking point is that conflicts occur because people don’t agree on which context to use in a given situation.  And that issue, in fact, is the core of what every story ever written is about: the author telling the audience that they have some special information or experience in regard to a particular kind of problem, and then promoting a particular context as the best one to use with that specific problem to have the best chance of solving, or at least lessening the effect of it.

Visit our store for novelists & screenwriters